Dr. Wayne J. Riley, President and Chief Executive Officer of Meharry Medical College (MMC), has been elected to the Institute of Medicine of the National Academies' class of 2012 for his contributions to the field of medicine, medical sciences and healthcare. Dr. Harvey V. Fineberg, president of the Institutes of Medicine (IOM), made the announcement this morning during the organization's annual meeting in Washington, D.C.

"To be recognized by one of the nation's foremost medical institutions, alongside the world's most innovative and influential minds in the field of medicine, is both humbling and inspiring," said Dr. Riley. "This distinction reaffirms my commitment to medical science, to teaching future leaders in health care and to positively impacting the wellbeing of others. I am profoundly grateful to the IOM for this honor."

Founded in 1970, the IOM is the health arm of the National Academy of Sciences which was established by an act of Congress and chartered by President Abraham Lincoln in 1863 at the height of the Civil War for the advancement of science and its "use for the greater good." Membership in the IOM is considered one of the highest honors in the field of medicine and science.

Dr. Riley's tenured career covers academic medicine, primary care, public health, health care management and policy, academic health science center administration and government. In addition to his role as president and CEO at MMC, Dr. Riley is also a professor of internal medicine at both MMC and Vanderbilt University School of Medicine, and is a senior health policy associate for the Robert Wood Johnson Foundation Center for Health Policy at Meharry.

Dr. Riley serves as a member and holds leadership roles in a number of leading organizations and high level federal advisory panels including the Association of Academic Health Centers, U.S. Department of Veteran's Affairs National Academic Affiliations Council and the National Institutes of Health's (NIH) "Blue Ribbon" Advisory Committee. He currently chairs the National Advisory Council on Minority Health and Health Disparities of the NIH. He is a member of the Board of Regents and a Master of the American College of Physicians and holds memberships in the National Medical Association, American Medical Association, American Clinical and Climatological Association, Society of Medical Administrators and Nashville Academy of Medicine.

A specialist in General Internal Medicine, Dr. Riley trained in internal medicine at the  Baylor College of Medicine Affiliated Hospitals Residency Training Program in Houston, Texas and is a Diplomate of both the American Board of Internal Medicine and the National Board of Medical Examiners.  He is a member of Alpha Omega Alpha Honor Medical Society and the Arnold P. Gold Foundation Medical Humanism Honor Society.

"I am proud to represent Meharry – a leader in training doctors in the care of underserved communities – as a member of the IOM," said Dr. Riley. "At Meharry we believe that even the most disenfranchised of this nation have a right to the highest quality healthcare. I look forward to drawing from the expertise of the IOM and its members for the greater benefit of our faculty, students and the patients we serve."

ABOUT MEHARRY MEDICAL COLLEGE
Meharry Medical College, founded in 1876, is the nation's largest private, independent historically black academic health center dedicated to educating minority and other health professionals. True to its heritage, it is a United Methodist Church-affiliated institution that is ranked second among all 141 medical schools in the social mission of medical education. Meharry is a leading national educator of African Americans with M.D. and D.D.S. degrees and Ph.D. degrees in the biomedical sciences. 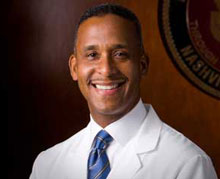 “At Meharry we believe
that even the most
disenfranchised of this nation
have a right to the highest
quality healthcare.
I look forward to drawing
from the expertise of the IOM
and its members for the
greater benefit of our faculty,
students and the patients
we serve.”

For the full roster of those elected
into the 2012 class of inductees,
click here.